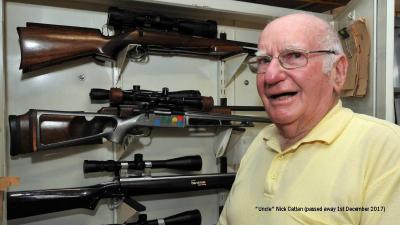 It is my sad duty to report that Nick Catlan passed away at 4am this morning. Dave Billinghurst called me this morning to let me know.

Nick was the unofficial "elder statesman" of Australian Benchrest, and was one of the finest gentlemen I ever had the privilege to meet.

Benchrest has always had its share of "bitch sessions", but I never heard Nick complain about anything, and I also never heard anything but good words spoken about Nick.

He was a proud Queenslander who loved Rugby League, but saw the light and moved to "cockroach country" at Port Macquarie and was active coaching juniors in the finer points of Benchrest there.

He loved shooting of all forms, but as his health declined over the past few years, he concentrated on rimfire and hunter.

Nick had a stroke about 7 years ago while in hospital being treated for cancer. This caused him some issues with his speech, but his mind was still sharp as a tack.

He was in a private hospital in the eastern suburbs in Sydney, and I went to visit him there. I had been to a business meeting, and was wearing a suit at the time. I was talking to Nick in his room when a nurse marched in and quite rudely told me I had to go immediately as it was time for Nick's physical therapy session, which Nick didn't like at all. Quick as a wink, Nick stammered out..."but this is Doctor Carnell, he is a specialist!" The nurse blushed and profusely apologized and asked me to let her know when and if Nick would be ready for therapy! When she left, I closed the door and we had a good laugh about it. He had a wonderful sense of humour.

I suspect that by now, Nick is already trying to rearrange the shooting program at the big range in the sky!

Nick had a great many friends in the shooting sports, and I know he will be greatly missed.

A sad day indeed,, he will be missed by all of us I am sure,, he sure was a character that was easy to like,, our condolences to his family,
rest in peace mate,

Oh dear - I guess it had to

Oh dear - I guess it had to happen eventually.
What a great character Uncle Nick was! I first met him many years ago in Canberra I think, and he was bubbling over with enthusiasm for rimfire and especially hunter class. His organisation of the postal rimfire hunter class for junior was a huge success in Qld - I think he had some 200 entrants at one time.
I know that it is a hackneyed phrase, but with the passing of Nick, benchrest in Australia is truly diminished.

A real sad day for us all, Nick was a one of guy that helped so many people in our field of shooting benchrest, man we had some
good times around Australia some we could talk about then some we can't, but it was all in good fun.
rest in peace mate!

UNCLE NICK
Nick Catan - A great man of Benchrest Shooting .
So many word could be spoken about this Great Man
May You Rest In Peace NICK
All my thoughts to your family .
Kind Regards Tom Hodgson

Sad news but unfortunately not unexpected as Nick's health has been in decline for a few years now but not his mind or enthusiasm they remained in top gear.

We first got to know Nick well in 1987 when our hired station wagon bogged in the sands of the SSAA range at Kwinana WA and Nick his 4X4, winch and snatch rope came to the rescue.

After that kept in contact and had many pleasant times as he was a man of many stories gleaned from his many years as a publican. He was always the gentleman bubbling with enthusiasm, keen sense of humour and full of ideas.

He had an unbridled passion for benchrest particularly Hunter class and Rimfire. His over riding emphasis was Juniors - getting them into shooting mostly at his own expense with equipment and ammunition, teaching them respect for the sport and the finer details of accuracy. He leaves a fine legacy and will be missed by many.

My last meeting with Nick was in August en route home from the Banana Coast at Coffs Harbour. He was in Port Macquarie hospital awaiting transfer to the Nursing Home. He was very frail but lit up when Billo and I walked into his room and we are so glad we didn't miss the opportunity to spend time with him. Leaving was emotional as all three of us knew this was probably the last goodbye.

Condolences to Belinda and family.

Sad news with PASSING OF Iconic Nick Catlin,
It was with great sadness I received news this morning of the passing of “our” Nick Catlin.
As older Benchrest shooters will know, Nick has been a real benchrest character for many years and always kept competitors on their toes with his incredible sharp whit and great sense of humour.
Without doubt, Nick was the “class act” always cheering shooters up, on all Aussie benchrest lines.
Gee he was truly a great bloke, and one of the quickest witted, funniest man around BR ranges.
Crikey, we will all miss Nick Catlin ... he was a living example of enthusiasm for benchrest shooting!
Having known Nick with affection since 1980, I can recall his huge input to our sport of benchrest first in the Brisbane and the Qld scene where he was famous for his beautifully made “Kats” 22 cal benchrest projectiles used by many in 222 and 22PPC competition rifles. He was an iconic member of the Queensland movement always inspiring others to progress in the sport
Later when Nick moved to Port Macquarie NSW, he constantly was on a mission to introduce junior shooters into our sport, personally funding many of these very worthy activities and personally conducting many coaching schools for juniors.
Nick Catlin I know, purchased numerous extra Anschutz prone target rifles for use by these junior shooters and payed for much ammo to encourage the sport.
Before ongoing ill health took it’s eventual toll Nick was an accomplished centrefire bench shooter as well as a very good rimfire exponent placing in numerous competitions across the east coast.
To say Nick was a great bloke and a true inspiration to others is a gross understatement ... he truly was a really good bloke.
We are diminished by his passing and will be remembered by the generous example he set for others to follow ... with total respect Nick you truly inspired us all!
R.I.P. Nick Catlin now in the big range in the sky.

Very sorry to hear that. Nick was a great ambassador for the sport and one of the few remaining links to the old guard of Benchrest shooters in this country.