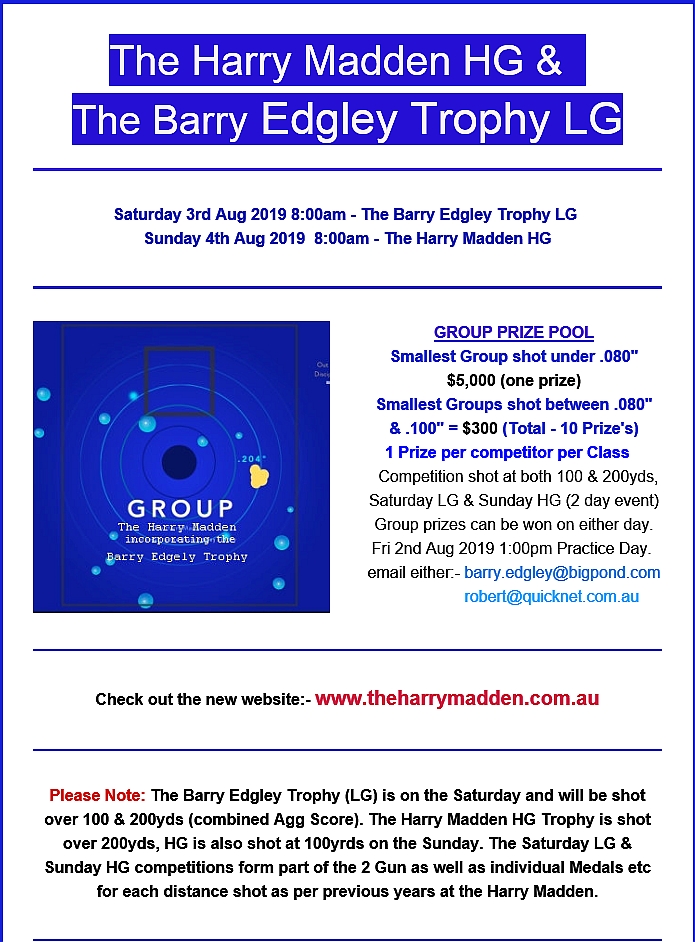 The Harry Madden this year which will be held on the first weekend in August and will now incorporate The Barry Edgley LG Trophy which will be shot on the Saturday over 100 & 200 yards.

Also the new website www.theharrymadden.com.au is up and if anyone has photos of the winners of the Harry Madden HG 200 Yards from the early days would be great if they could send them to me as there are quite a few missing from the early years as if those days there were no digital cameras or smart phones.

Some general background of the event but most know the Harry Madden Comp but the Barry Edgley LG Trophy is new on the Saturday.

Total prize pool for the 2 day event in August is $8,000, plus Medals & Trophies, plus 2 Gun Title, sanctioned registered match, also any records shot are registered as a record.

This will be a big event this year and now the Saturday will be known as the Barry Edgley LG Trophy shot over 100 & 200yds, the winner will be Combined Agg. The Sunday as you know is the Harry Madden HG 200yds Trophy and HG is also shot at 100yds.

Hi to all those avid Group Competitor's

It would be great if you could use the "CONTACT" section of the website (right at the bottom) and lodge your email address with us. Also if anyone has photo's of the missing years of the Winner's of the HG Harry Madden competition from the 70's, 80's & 90's, if you could email them through would be great. Nominations are now open for the August 2019 comp also?