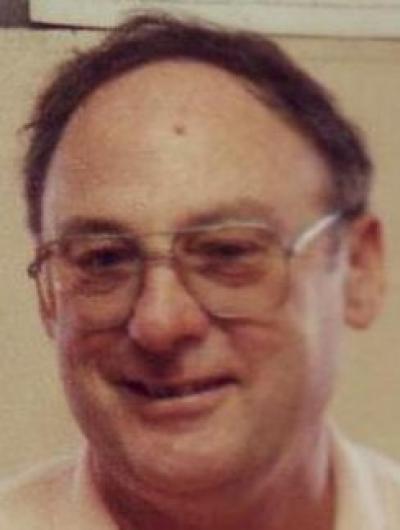 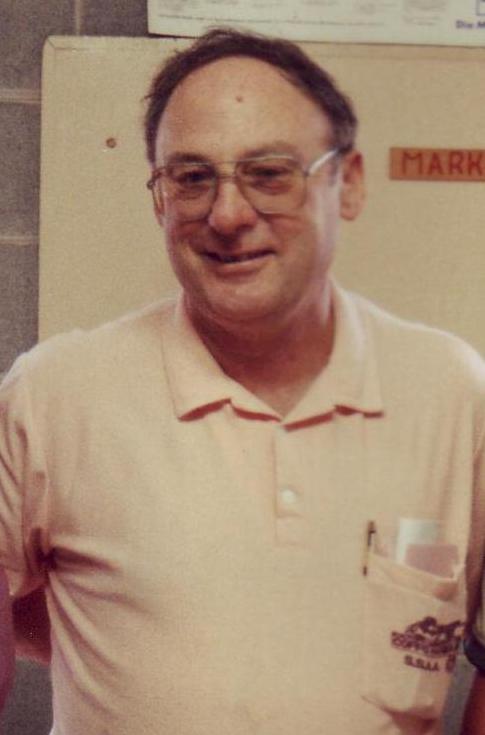 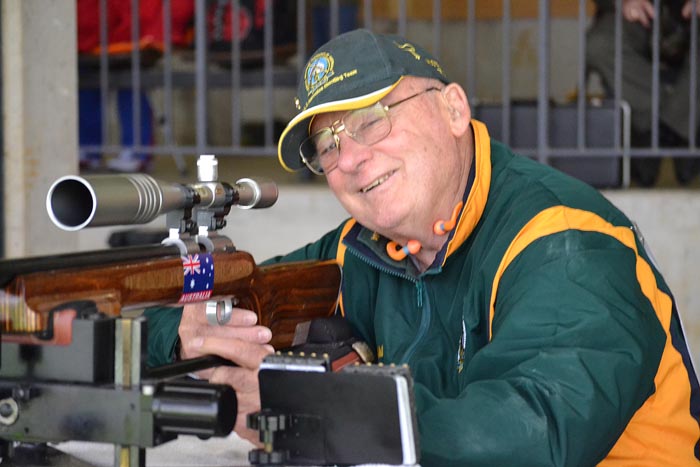 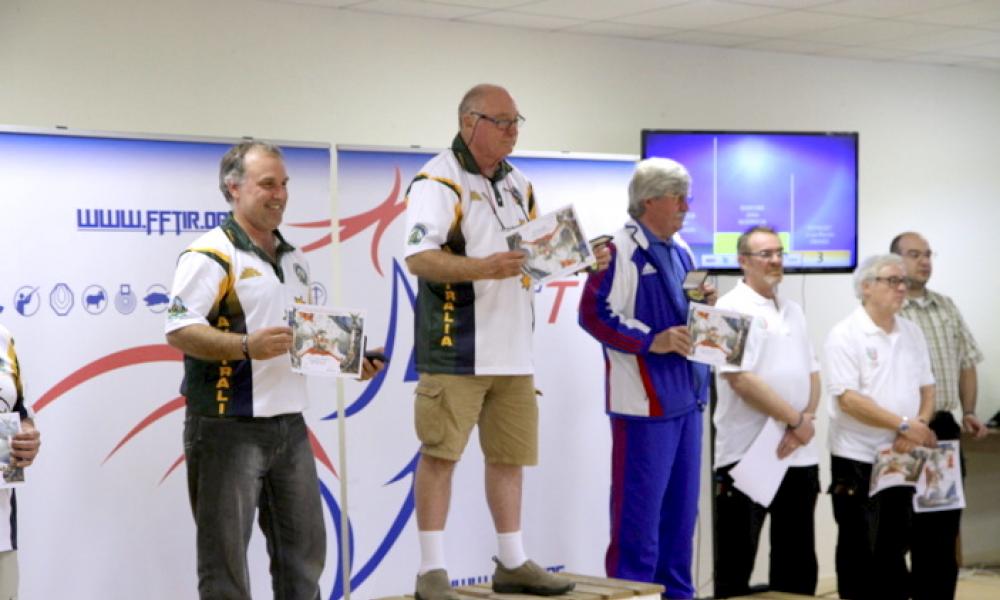 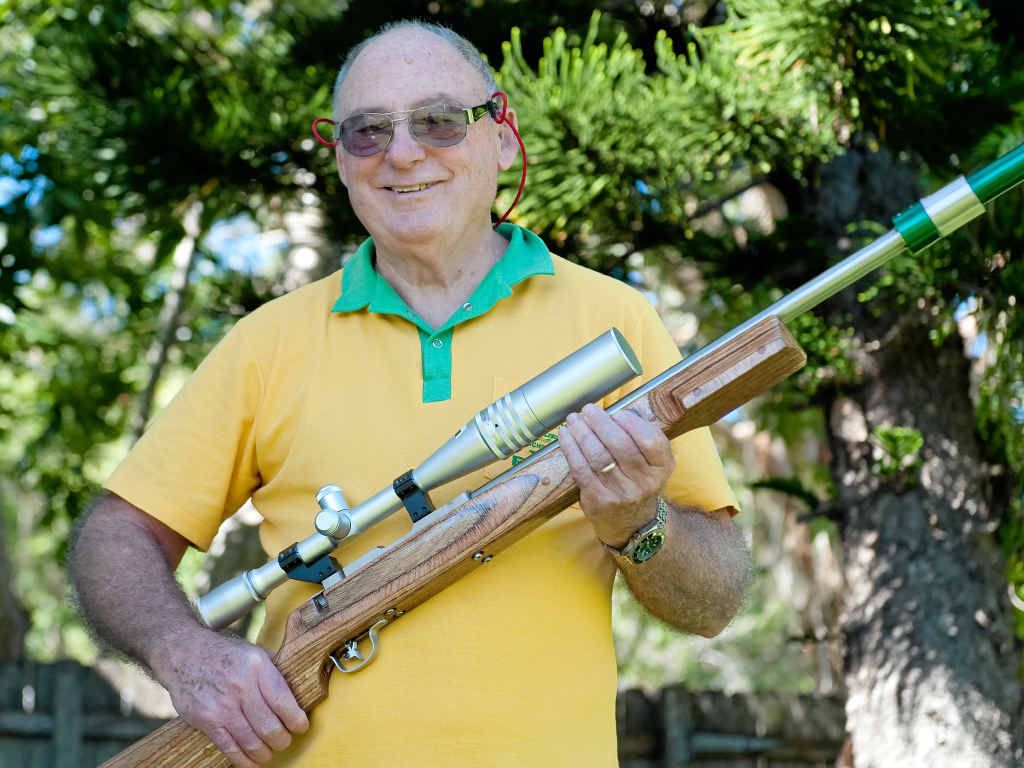 This brief history dispels the common perception that shooters do not excel in other sports. Many cases disprove this misconception as John Radford’s unique story does.

John Radford was born at Gunnedah NSW in November 1938. His Farther Len was already a former world champion in another sport, but was also n/w NSW clay target champion and also a natural athlete and also a brilliant rifleman. He also owned and ran a sports store in Boggabri NSW at that time.

At the outbreak of W/W2, Len ( John’s Dad) enlisted, only to be pulled out of his unit by the then Australian High Command, to work with Evelyn Owen on the famous OWEN GUN project at Lysaght’s, Port Kembla. The Owen Gun became the best sub-machine in W/W2 according to USA troops who also desperately wanted them …a clever simple design which never jammed !

From an early age, young John wanted to become a “world champion” like his Dad however he had 2 major problems, firstly he inherited his “Mothers genes”, and she didn’t have a sporting bone in her petite body., with the result in physical sport John had to train very hard unlike his naturally talented Dad. The 2nd and major hidden problem was not discovered until he was age 65. He was born with a heart problem with only 40% of heart function which caused him to “black out” competing at State Level in physically demanding sports … apparently close to death on thousands of occasions.

Many observers have commented John would never die wondering ”What if only” because earlier he competed in a raft of sports during his now 75 years, at regional, state and Australian levels being a representative long jumper, Rep. junior soccer player, Champion junior Pro cyclist, NSW State Champ Water Skier, NSW F1 power boat champ, Australian Boat Seafari Champ, and a leading off-shore spear fisherman (free diver), then at age 41 in 1979 he then turned his tallents to centrefire benchrest shooting.

He is also remembered to have with Noel Spalding, co-started the Pro Gun, Anti- Barry Unsworth campaign in 1987, so all responsible firearms owners could retain their firearms and then organised the campaign against PM John Howard who tried the same tactic following Port Arthur in 1993/95.

John for 15 years had shot foxes on an amateur basis however a chance meeting with the legendary benchrester and gunsmith , Peter Nesbitt of Casino, changed his perception on accuracy shooting forever. Within 12 months in 1980 Radford had formed, (with Joe Garrett), the then Coffs Harbour Benchrest Rifle Club (later Coffs SSAA Branch). Radford was President for the first 6 years.

He started attending National B/R matches in1980. In the 1981 Nationals at Seaham range NSW he recorded the H/V also experimental “Small Groups,” being the first Aussie shooter to have success with Australian AR2206 Powder which ADI had him testing extensively. At Belmont Qld in I982 Radford shattered the then 100 yd Australian L/V record of .114 to record .082 for a new Australian record which stood for 4 years.

In 1983 at Adelaide Nationals, Radford won the H/V Title and 2nd in L/V then placing 3rd in 4 Gun Title and picked up 9 points for the Hall of Fame. Also won he the award for the most outstanding shooting performance at the meet.

In the next 9 years due to increasing business pressure & illness Radford placed in State and National events without any more HOF points securing numerous top 10 placing’s without any National wins.

In 1993 at Kwinana WA, Radford won the H/V Title also the Rimfire crown. He was inducted into the unique Australian “Benchrest Hall of Fame” (every shooters dream) No. 15

1993 when suffering ongoing “Ross River Fever” he was selected to represent Australia in Finland at the world B/R Championships, and placed 8th at 200m in L/V event.

1994 was a bad year … Radford was advised he had only 3 years to live, so Radford sold all his competition Rifles to (late) John Darke and tried to survive. Every 2 years or so his medical advisers would renew their dire forecast telling him to get his affairs in order. This saccharide continued on for 15 years, during which time Radford did not fire one shot and was completely out of the sport!

In 2010 and now competing in Rimfire competition, Radford won the Australian Rimfire Group Title at Belmont Queensland, and the first to congratulate him was legendary “Gentleman Max Coady”. At age 72, most of the younger competitors did not know of Radford’s extensive B/R background and were shocked by his win! …. 2011 saw Radford suffer bad health and bad results.

The above is considered to be a rewarding result for a man of 75, who has devoted 35 years to B/R

Radford was advised he is the first Australian ever to represent in Centrefire and Rimfire World Titles! He has commented he could feel his late Father “looking down on him with approval” in France!

Asked what were his 3 most satisfying life’s achievements, he replied the first to equal the great legendry Brendon Atkinson’s achievement in winning a World Title, at 75, I’ve finally done it!

The second is my record of co-founding and directing the pro firearms ownership campaigns against Premier Barry Unsworth (1987), & then again in 1993/95 against PM John Howard for reputable firearms ownership, resulting in retention of our firearms today.

Third achievement was proving the doubters wrong, by winning the world Individual Title in France. He was quoted as saying, “if I die tomorrow I will die a happy man”!

John is currently committed to coaching (on a free basis), 3 other firearms clubs as well as 5 overseas countries (who requested help), in a effort to strengthen the sport locally and worldwide.

He said it’s great to help our sport strengthen and grow both here and overseas.